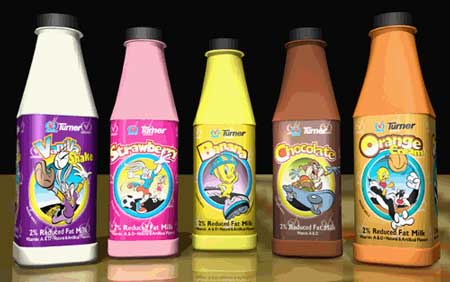 Shanghai Jie Qiang Tobacco, Sugar, and Wine Co., Ltd. is the largest food distribution company in China, with annual sales in excess of US$ 500 million. The company has extensive distribution channels, including 1,674 hypermarkets and supermarkets in Shanghai, 80 of which are Jie Qiang retail grocery stores, and over 10, 000 distribution points through local jobbers and local stores. Jie Qiang owns a total of 120 of its own stores and distributes an extensive inventory of over 3,800 food products and 10,000 total products throughout China from international giants such as Heinz baby food, Nestle, Maxwell House coffee, Coke, Pepsi, Kodak, Gillette and Hall's lozenges. Jie Qiang will now add Looney Tunes milk and flavored milks to its prestigious food lines.

The Looney Tunes flavored milks were created by China Premium for the Chinese market. Through a Master License for China with Warner Bros., the company is combining these great-tasting, flavored Western-quality milks with some of the most popular American cartoon characters. The milk is available in seven varieties, including whole, low-fat, chocolate, strawberry, banana, orange and vanilla. Each flavor is branded with the Looney Tunes name, and each variety is represented by a specific cartoon character. Taz, Lola, Bugs Bunny, Sylvester and Tweety are the ambassadors of these innovative dairy products which were designed to encourage Chinese children to increase their dairy consumption in an effort to promote better health for this younger generation.

"Achieving a distribution agreement such as this is an important milestone for our company. We have proven that we have great-tasting, premium milk products that the Chinese like, but we've needed a significant food distributor to achieve the most effective market penetration possible in China. We have partnered with the No. 1 distributor and now have almost instant access to virtually all supermarkets in Shanghai," commented Mr. Roy Warren, president and CEO of China Premium.

China Premium has an exclusive supplier contract with U.S.-based Lance, Inc. for the export of private-labeled Looney Tunes crackers and snack foods to China. China Premium, through its newly formed U.S. subsidiary, Bravo! Foods, Inc., has recently begun rolling out Looney Tunes flavored milks in select areas of the U.S. and expects the brand to be available nationally by the end of 2001.