Dirt to Dollars at Dickson's Dairy: Part One

When Leo Dickson & Sons' dairy farm is finished with its new waste management system, the odor will be gone and the neutralized solids will be sold as a nutrient-rich fertilizer. This first installment will discuss the overall plan for the project; Part Two details the waste treatment and technology; Part Three covers the cost, justifications and returns.

Due to his open mind toward new technology, Phil Dickson, president of Leo Dickson & Sons dairy, is taking waste management technology beyond the lagoon, beyond compliance and into the realm of revenue generation.

The dairy industry has long swept its waste under huge rugs…or, in real terms, under crusts formed across giant lagoons. There, dairy farm and production effluent sits for months and eventually, is pumped sprayed onto fields in the form of a pungent fertilizer…that wins no friends in downwind commercial, retail and residential areas that increasingly bump against land once the exclusive domain of farmers.

This was fine, and still is, for remote areas where there are few if any non-agricultural neighbors. But time and progress, measured in real estate development, marches on. And so do political pressures and environmental regulations.

At Leo Dickson & Sons, a U.S. Environmental Protection Agency CAFO (Confined Animal Feedlot Operations) regulation "Notice of Intent" to comply with new environmental regulations was due on Jan. 1, 2000. Two years from that date, an actual waste management or "whole farm" plan is due, and by New Year's Day of 2005, dairy farms, plants and other agricultural-industrial sites must be in compliance.

This and related laws are a reaction to an over-abundance of nutrients such as nitrogen and phosphorus, which can result from over-fertilizing and also from traditional waste (mis)treatment. And so environmental regulations require farmers to create a "mass balance," or means of controlling nutrient levels.

"This will be, it has to be mandated. In our case, compliance means that there has to be some kind of processing system. The whole industry's headed this way, it's just how soon people get with the program," Phil Dickson, president of the dairy, told Dairy Network.com.

Deal Signed Oct. '99
To "get with the program," Leo Dickson & Sons contracted in October of '99 with Bion Environmental Technologies of Denver, CO, (www.biontech.com) to design and install what Bion calls its Nutrient Management System. The system, when up and running, will help the dairy treat its waste. Additionally, Bion will pay Dickson for the solids, haul them away, and convert this waste into sellable "BionSoil" fertilizer, which reportedly smells and looks like a very rich potting soil. (This will be discussed in the section, Sellable Soil, in Part Three of this story.)

Bion has commercialized this type of system for approximately a dozen other dairies and several other livestock-agricultural businesses. The dairy installations alone will produce in excess of 125,000 cubic yards annually of the nutrient-rich, organic BionSoil, formulated into products for the horticulture and agricultural industry. 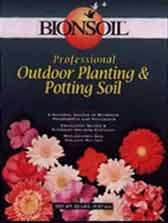 The Dickson contract calls for design, installation and operation of the system. When the Dickson deal was first announced, George Rice, Bion project and operations manager in Avon, N.Y., hailed the Dicskons as "established and well-respected members of the dairy farming community."

The system was chosen for its straightforward design, which Dickson said is low in terms of mechanical demands. It uses a combination of "bugs" (microorganisms) and gravity feed or pumps to move the waste through treatment pools, or cells. An added attraction to this system was its "turnkey" nature, because it includes treatment as well as removal of unwanted solids. A typical alternative would be to use, for instance, a solids-liquids separator that leaves the dairy with the prospect of digging a hole and storing liquids indefinitely for later treatment.

One System for the Farm, Another for Dickson's Customers
A system—actually a combination of two systems—is being installed at the dairy. It will handle dairy farm waste, and when the system is complete, will also include a system to treat incoming waste from others, which will likely include Kraft Foods (Dickson's largest milk customer) and a nearby Leprino Foods plant.

"Up until now, we've pretty much just land-applicated our waste, that's all we‘ve ever done. Now, we're going to process and source-separate the solids from the liquids. This will enable us to continue our growth and thereby also be in compliance with CAFO permits," says Dickson of the first-phase system on the dairy side.

Later, when the "commercial" system is ready, Dickson will be processing the waste from its outside customers, source-separating the liquids from the solids using a vacuum rotary press-based process. The liquid portion will go through a treatment system, which will be designed by the same engineers working on the agricultural side of the dairy.

In January, a final design was completed on the agricultural portion of the farm's plan. In February, the team began to design the commercial side, and expects the dairy's existing belt-filter presses will be incorporated into the solids-processing of this portion of the treatment facility.

Startup in Spring 2000
And if all goes as planned, the agricultural system will be installed in the spring of 2000, and the commercial side will go online by the end of 2001. At that point, it's estimated that Bion will have harvested, trucked off-site and sold about 10,000 cubic yards of solid waste-turned-fertilizer. The liquid portion of the waste stream will go to a man-made wetland that Bion is developing.

For details on the installation and the technology behind Leo Dickson & Sons' waste management upgrade, tune in for Part Two, which will post to these pages in approximately one week. Part Three will discuss the benefits and cost-justification for this technology.